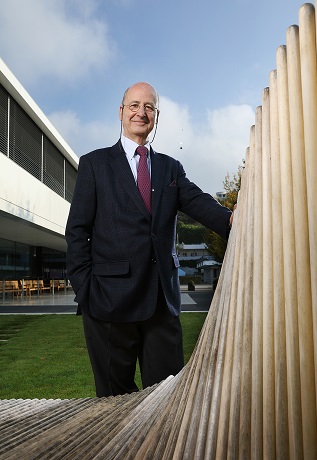 Someone once called Stéphane Garelli a "practicing" academic in the sense that, as well as his involvement in the academic world, he has always managed to remain very close to market realities and the world of business. He has been, and still is, closely associated to some of the world's leading companies.

Between 1974 and 1986, he was managing director of the World Economic Forum and the Davos Annual Meetings, the world's most important annual gathering of business and government leaders.

Stéphane was advisor to the Managing Director of the Société Générale de Surveillance (SGS), the world's largest inspection company, in the early 90's. He developed projects for the business unit in charge of government contracts relating to customs, import and export verification, tax collection, etc.

In the banking industry, he designed and implemented a new strategic management process at the Swiss Bank Corporation head-office in Geneva. The SBS, formerly one of the three largest Swiss banks, has now merged with the former Union Bank of Switzerland to form the new United Bank of Switzerland (UBS).

For the Management Board of Nestlé, the world's largest food company, he designed the methodology for, and conducted a "Competitiveness Audit". This major project focussed on Nestlé’s relationships with key suppliers and top customers.

More recently, he was Chairman of the Board of the FF Sandoz Financial and Banking Holding and member of the Board of Directors of the Banque Edouard Constant. These two entities were part of the Sandoz Foundation (a prominent European investor in the pharmaceutical, telecommunications, hotel, watch, and financial industries).

Professor Garelli was also Chairman of the Board of "Le Temps", the leading French language Swiss newspaper, for 15 years.